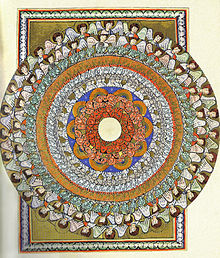 Hildegard von Bingen is one of the most enigmatic women in history. Despite having lived almost a thousand years ago, his figure is still present in European culture.

Diverse events commemorating the birth of St. Hildegard von Bingen, a medieval figure who continues to amaze us today, were held all over the world in 1998. The Benedictine abbess of the 12th century, from the lands of the Holy Roman Empire, has bequeathed us a gigantic work where she deals with the human and the divine. One of its most enigmatic aspects was its ability to predict, to have revelations and its gift for mystical visions. It is a unique case in history because there has never been another woman who had visions and revelations in a state of vigil. Hildegard was able to enter into ecstasy without losing consciousness, seeing, hearing and knowing simultaneously as he continued to be conscious in the earthly world. During her lifetime she was admired and respected by monarchs, popes, noble knights and learned friars, something unheard of for a woman in the Middle Ages. Today many claim it as a precursor and inspiration, from New age musicians to ecologists or feminists.

Time of monks and knights

The 12th century in Europe was an exciting time. The feudal lords extended their power over their vassals but new and radical social changes were already appearing on the horizon. These were times of political crisis in the Church, of crusades to liberate holy land and of struggles against “heresies” like the Cathars. Despite this, peace reigned throughout almost the entire old continent and this brought prosperity to the peasantry and merchants, with the bourgeoisie emerging as a new and rising social class. The Romanesque gave way to Gothic art in an unprecedented building impulse and began to return the lost knowledge of ancient Greeks and Romans in Arabic translations to illuminate again the dark landscape of the medieval. This is the age in which Hildegard was born, into a noble family. Always weak and prone to disease, he had, since he was three years old, the wonderful capacity for divine vision that he never abandoned. At the age of eight she was send to a monastery to be educated, and after a while she professed perpetual vows, becoming an abbess in 1136. In 1141, during a vision, he was commanded to write everything he had seen and heard. It was then that he became a fundamental figure in European society.

The first writing where we find his visions is the Scivias or Sci via Dei (Know the ways of God). If anyone wanted to be sure to follow the “right path” and the salvation of his soul, he could read this book, full of metaphors and visual imagination to have a broad sample of the earthly and heavenly world. In this medieval bibliographic jewel, the first Sibila’s visions are told, supported by illustrations of intense chromaticism, very luminous, unique for the time and made by monks under the direction of Hildegard herself. It was written with the collaboration of the monk Volmar, one of the three secretary-counselors that the nun had throughout her life. He wrote to St. Bernard of Clairvaux seeking understanding and conformity. He recommended his work to Pope Eugene III. The pontiff sent a commission to examine it, and the conallusions were so favorable that he asked her to continue writing. From this moment on, and already more than fifty years old, she began a life full of activity. In 1150 he founded his own monastery in Rupersberg, Germany, which brought him great problems because his previous convent did not want to lose this point of attraction, visits and, of course, money.

In the Hildegard´s correspondence we can find the most varied topics, from Theology to councils of political order. It is surprising how freely he addressed these powerful men who sought his words. He never minced with his words and responded directly to all, whether king or servant, and always according to his own reasoning. It is curious to see how great rulers, unaccustomed to the displeasure, greatly respected the abbess. This respect was not toward her as a woman, impossible at that time, but as a direct messenger of God. She herself knew that only in this way could she find an echo, as a “seer” and not as a woman, so she often presented herself as “a poor ignorant woman”.

Among the occupations of an abbess at that time was caring for the community in her charge, both spiritually and physically. But Hildegard’s interest in medicine and science went far beyond that. Among his works we find medical writings such as Liber simplicis medicinas or Physica and Liber compositae medicinas or Cusae et curae, where he describes the human being in relation to natural elements, symptoms and treatments of diseases. He argues that the alteration of the natural environment can lead to illness (concept that preceded ecology), the importance of food in health and the use of plants as remedies. In addition, he commented on the influence of psychic states on bodily ills, as modern theories of psychology do today.

Music is one of the mainstays of the abbess of Ruperstsberg’s work. He considers it a means of communicating with God and a way to rejoice the spirit before the sorrows of this world, recovering lost harmony. Most of his compositions are bold and deviate from the styles of the time. They are works that cover wide registers, with very elaborate melodies, where music is as important as poetry. It can be said that they constitute compositions like the Gothic temples made music. Among his best-known creations is the beautiful cycle of songs from the “Symphony of the Harmony of Heavenly Revelations”. Today musicologists value his work very much, there are recordings of his complete work and curious mixes of his melodies with Techno and New age rhythms that may or may not like, but show the universal nature of his genius.

During his last years, his fame continued to spread throughout the continent. Busy in a thousand tasks, unfolding an unstoppable activity, advising on spiritual matters, transcribing her visions, composing music and poetry, travelling, founding a new monastery…

She was the first and only woman in centuries authorized by the Church to preach, which she did on numerous tours of villages and temples in Germany. At the age of eighty came what was perhaps his worst experience: a conflict with the ecclesial authorities. The abbess had allowed the burial of an excommunicated nobleman in the Rupertsberg cemetery. Shortly before his death, man had reconciled himself with the Church, an action that escaped the knowledge of the clergy. Hildegard refused to comply with the episcopal order to exhume the body and remove it from consecrated land, alleging the final reconciliation of the deceased with God. They spent months of threats and prohibitions against their community. Finally, almost a year later, the archbishop, upon learning the details, lifted the penalties. It was the last victory of an exceptional woman in a difficult time. He died a few months later, on 17 September 1179.