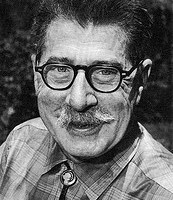 Roger Hayward was an American artist as well as an inventor, almost forgotten today. He died in 1979, having spent eight decades in this world, which filled with a multitude of activities. In addition to being an excellent painter and sculptor, he also worked on various architectural projects and, during the 1930s and 1940s, was a kind of “orchestra man” at the Griffith Observatory in Los Angeles.

Hayward was involved in optical tasks as he was in preparing the illustrations for exhibition panels. In 1945 he patented a Schmidt-Cassegrain telescope camera and later worked closely with the great Linus Pauling to create illustrations of molecular structures. However, if there is one project that can be considered his masterpiece, along with his other patents on various optical devices, is their great Moon models.

Yes, because from photographs taken by means of telescopes of the surface visible from the Earth of our natural satellite, Hayward created several lunar models, like realistic giant sculptures, which were used in the cinema, museum and exhibitions. Some have been lost, which is a pity, but others can still be contemplated, such as the present in the Griffith Observatory.