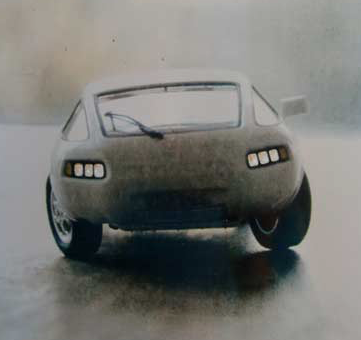 You look at it and at first it looks like a normal Porsche 924, a classic’ 70s and’ 80s car with nothing out of the ordinary. But, when you look at a little more, there are things that don’t add up and you start to think that there is something wrong with this vehicle….

Why are the mirrors placed like this? Are the rear wheels directional? Wait… why are the seats looking backwards?

Porsche fans had been listening for many years that the aerodynamics of some models, such as the 924 or 928, were “wrong”. Come on, they could run faster and more efficiently if you turn them around.

Back in 1992, the Dutch designer Oskar de Kiefte, known for his strange conversions of all kinds of vehicles, discovered that the Porsche house itself had already seen the problem in its wind tunnel tests (the myth claimed it was, indeed, the results of the test in the tunnel with the car “upside down” had been surprising, something that the American designer Norman Bell Geddes had already studied many years ago in some vehicles of his time). The fact is that Oskar de Kiefte decided to go beyond the wind tunnel and create a work of art on this idea of the “reverse car”. Thus, starting from a crazy idea, the two inverted Porsches of the Dutchman, a Porsche 924 and a 928, were born, which were the attraction of various exhibitions on automobile design.