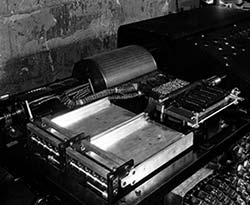 The history of computer science has already made John Atanasoff the inventor of the first electronic digital computer*. Electronic computers differed from their mechanical predecessors in that they operated on the basis of electricity, valves and circuits, not on toothed wheels. It used to be considered that the first computer of this type was Colossus, built by mathematicians Turing and Newman in 1943, to help the British admiralty decipher the codes of the, theoretically infallible, Enigma machine of the Germans, with which the Nazis communicated to their troops the combat strategy in World War II. But before that, between 1937 and 1942, Atanasoff built two electronic computers. Between him and his disciple, Clifford E. Berry fine-tuned those forgotten machines, calling the largest of them ABC: Atanasoff Berry Computer.

The recognition did not come from scientists or engineers, but through a court ruling that, in principle, had nothing to do with the mathematician-inventor. In 1967, a lawsuit arose between two large companies, the Sperry Rand Corporation and Honeywell. Sperry had acquired the patent on the primitive ENIAC computer, charging royalties for its circuits to other companies. By refusing Honeywell to pay, the conflict broke out, and this company was sued by Sperry. As a counter-attack Honeywell claimed that Sperry was acting monopolistically and that, to top it all, he was using an invalid patent because, in preparing his defense, Sperry found references to an certain Atanasoff as a true inventor of the product in dispute.

The judge ordered the search for the unknown Atanasoff, who declared surprised that it had nothing to do with the design of the ENIAC, which was completely true. What came later surprised the inventor even more. In the trial they showed him the plans of ENIAC, discovering with amazement that many of his circuits were too much like the ones he had designed for his ABC machine. After many years of litigation between the two companies, the winner was Atanasoff, who had not sued anyone and had no interest in the matter and turned out to be the one that had been really harmed by the big companies. Judge Earl R. Larson of Minneapolis ruled on October 19,1973 that the ENIAC patent was invalid. The verdict makes it very clear that the “inventors” of ENIAC had relied, not to say copied, on the designs of the forgotten Atanasoff. But this did not bring immediate fame to the obscure inventor, the press was at that time heavily involved with other less intellectual subjects, namely, something called Watergate.

Over the years, the admiration for the true inventor of the computer has grown in the field of computing, and he has already been recognized as such. How did Atanasoff come up with an electronic computer? At the end of the 1920s he was doing his doctorate in theoretical physics at Madison University with a thesis on the electronic structure of helium. The calculations needed for this work took many very laborious months, which led him to imagine a machine to facilitate the task. After obtaining his doctorate in 1930 and a job as a university professor, Atanasoff did not forget his idea and began to work seriously on it. Seven years later he had already designed the schematics of his machine, separating the memory from the calculation functions and determining that the computation would be digital and not analogue. But his attempts to create a truly functional calculation system for his machine went nowhere. One day, totally blocked mentally, he decided to leave his laboratory and take the car to clear himself, circulated for about 300 kilometers. In the middle of a dreadful cold, he stopped to have a few drinks in a very illuminated bar. Curiously in that place, maybe because of the alcohol, his brain lit up. He decided not to use mechanical switches, as the calculators did then, but electronic switches, never before used for computing. It also decided to use the binary numbers, operated according to logic laws, to program the machine. The two decisions were geniusly successful.

The ideas that arose in the middle of a road bar during an uncomfortable night, inside a restless mind, are still alive in our computers, which continue to function through electronic circuits and binary numbers.

Atanasoff and Berry had almost entirely built their ABC computer when World War II broke out. This set them apart from computer science, moving the inventor to work in a laboratory for the United States Navy. Atanasoff had no time in the middle of complex world events to present his computer, which would have brought him support and public funding. The ABC was completely forgotten and its trail was lost, its designer devoted to other matters, until the Rand v. Honeywell trial came up. But if the machine was lost in time, why did Atanasoff have a decisive influence on the development of modern computers?

The answer is very simple and is found in one man and one machine: Mauchly and ENIAC. This computer was the first general-purpose computer designed by engineers Eckert and Mauchly. It was a monster much bigger than the ABC and much faster, with many advantages over the “home” computer of Atanasoff. But under its imposing aspect it turned out that the circuits were based on the ideas extracted from the small ABC. In May 1941 Atanasoff wrote to Mauchly, then at MIT. Shortly afterwards they met in person and the inventor taught the engineer the intricacies of ABC, as MIT was designing a new computer for the army. Atanasoff contacted MIT in the hope of working with them to develop the new machine. Instead they forgot about him, illuminating ENIAC four years later, not even mentioning the man who provided the basic ideas for his conception. Atanasoff was led to believe that ENIAC was based on concepts prior of his ABC computer. In the middle of the war, with his ideas to create an engineering company, which he carried out after the war, and the success of ENIAC, Atanasoff did not even think of patenting his circuits. It would have been one of the most important and lucrative patents in the history of mankind.