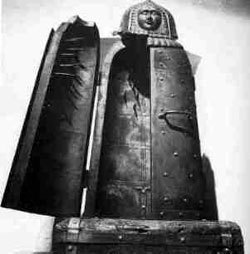 For a few days I have been reading a thick book that, apparently, deals with esoteric-medieval matters. The book, an essay on certain medieval myths, reviews some of the topics of those “dark” centuries, as one who cooks an omelet with a recipe he knows too well. In short, I came across the subject of torture on the part of the evil Inquisition and… the book reviews the presumed history of medieval tortures and affirm that the iron maidens were something common!

The iron maidens (apart from having named a famous music band after him) do not really have much history. This is that kind of female-form metal coffins in which the torture victim was supposedly introduced and, after closing the door, trapped and pierced by a pile of metal spikes. Yes, it appears in all kinds of films, books and even The Simpsons, but is not medieval. In fact, the iron maidens appeared late, supposedly back in the 17th century and had nothing to do with the Inquisition. The concept has a literary origin and, in reality, no case of medieval iron maiden is known.

However, with the fame created by the romantics on the subject, a few iron maidens were built in the 19th and 20th centuries for dark purposes. Much was said about the maiden of Nuremberg, supposedly from the 15th century, but today it can be said that it was an elaborate object much later.