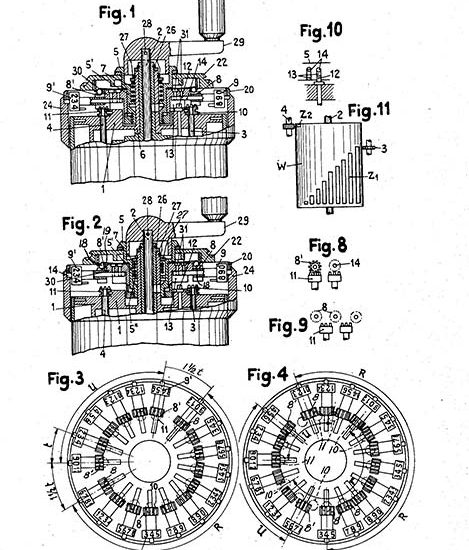 Imagine a small black cylinder, made of high quality materials, looking like a high-tech pepper mill, about 10 centimetres high by 5 centimetres in diameter. Now, dream that by moving several dials and turning a wheel with a crank, you can perform various calculations with extreme precision, the result of which will be presented to us through an analogical numerical table. That wonder fit in the palm of his hand. With it one could add, subtract, multiply, divide and, with a little more practice, perform more complex mathematical operations.

It was the Curta, a truly amazing portable mechanical calculator. Well, it was surprising for its precision and mechanism but, of course, today it may not attract too much attention. After all, we have electronic calculators everywhere, even on mobile phones. Why bother looking back at a jalopy like the Curta? For the simple reason that, behind the little contraption, there is an astonishing story and technology that, when electronic calculators did not yet exist, took us very far. Engineers, architects, scientists and economists used the Curta calculators from their appearance in 1948 until they were forgotten in the 1970s, when electronics banished their use from the usual practice, turning these jewels from mechanical calculators into objects of collecting.

There were two basic models of Curta mechanical calculator. The second of these models was introduced in the mid-fifties and could represent up to 15 digits in the result window (in the first model were 11 digits), something that surpasses in precision many current electronic calculators. The mechanics of use were somewhat complicated, but once you took some confidence in the machine, its use became virtually addictive. The digits were entered, one by one through sliding dials, then a set of turns was executed with the crank handle to add numbers or to select operating and result modes. A simple hoop trigger made it possible to erase the memory and start again with another operation. With practice, a person could perform complex calculations at high speed, all with mechanical interface, without any electronics.

In certain applications, this calculator even came to be used in the eighties, as happened in the field of calculations carried out in motor racing. Curta calculators were manufactured for about three decades by Contina AG Mauren, Liechtenstein, and are considered to be the most perfect hand-held mechanical calculators ever built.

Now, there is something in the Curta that makes them very special objects. Behind their intricate mechanics, on the other side of the engineering that animates them, is the story of a lonely man who managed to survive one of the most terrible places ever seen in human history. And precisely because of his calculator, he was able to overcome that. It’s the story of Curt Herzstark, father of the Curta calculator.

Herzstark’s calculator reigned unrivalled for many years, but while engineers, technicians and scientists were using them, they were unaware that they had in their hands a device stemming from the most terrible of despair. It seems incredible that a machine that stood out for its amazing precision would have emerged precisely in the mind of a tormented man who had been confined to a Nazi concentration camp: Buchenwald. Before Herzstark there were many different models of calculation machines, some very precise, whether mechanical or electromechanical, but no real portable precision calculator had been manufactured, which could be carried in hand. Curt Herzstark was born in Vienna in 1902 and died in Liechtenstein in 1988. All his life he was surrounded by machines and clockwork mechanisms. His father was the owner of an office machinery distribution company which, over time, became the owner of its own calculator manufacturing workshop. It was a business with great competence, especially in post-World War I Europe, when many manufacturers of war materials tried to survive by converting themselves into manufacturers of machinery for industries and offices. But, there was something that all calculator users were looking for and that no company, however many they proliferated at the time, was able to offer: A portable calculator was needed! Actually, carrying a heavy load of equipment in a backpack cannot be considered very practical (there were some “portable” models but they were very cumbersome and impractical). So Curt Herzstark put a lot of effort into achieving his goal: to build a simple, elegant and precise calculator that could fit in one hand. By the end of the 1930s he had already designed the basic aspects of what was to be a revolution, but another terrible war was set in the middle to ruin his plans.

The annexation of Austria by Hitler’s Germany changed all plans of Herzstark who belonged to a family of Jewish origin. From then on, the entire production of his company was to be used for precision machinery for war vehicles, the portable calculators and other “nonsense” had to be forgotten on Hitler’s orders. Bad enough, it wasn’t terrible either, at least they were allowed to continue working, but an incident with several workers in 1943, accused of spying on behalf of the allies, led to his arrest and imprisonment without trial. After passing through a terrible cell, Herzstark was sent to the Buchenwald concentration camp, where his fate was sealed. But all of a sudden everything changed when an SS officer offered to continue living in exchange for working on the creation of precision parts for warplanes and missiles like the V2. Herzstark was put in charge of the machinery manufacturing operations in Buchenwald, which made it easier for him to “hire” other prisoners, thus saving their lives. It was all terror and fear, any day could be the last. However, fate smiled upon Herzstark. The Nazis learned of the pre-war engineering efforts to bring a portable calculator to life. They offered him a deal, namely, to be able to live in exchange for building one of those machines as a “gift of victory” for Hitler.

Herzstark continued to work as a forced prisoner, but was allowed time to devote to the task of designing the portable calculator. Little by little he was giving shape to the plans, in detail, while the war continued its course and his companions in captivity were falling. He believed that he would never get out of that hell alive, but when spring 1945 arrived the camp was liberated by the Allies. Free, at last, he travelled with primitive prototypes to Vienna, where he found that his factory no longer existed. He patented the machine in hopes of attracting some manufacturer’s attention, but no one listened until the news about a brilliant engineer and a calculator fascinated the prince of Liechtenstein. And there in the mountains, lost in that alpine corner, he found all the support he needed. This is how Contina was born, which in 1948 marketed the first Curta model. The success was immediate and, although there were certain conflicts with investors, Buchenwald’s survivor maintained his position and lived surrounded by successes until the end of his days. Highways, industries, power lines and even satellites and spacecraft were built with the help of Curta portable calculation machines. It can be said, without exaggerating, that an important part of the technology of the mid-20th century saw the light of day thanks to the dream turned into reality in one of the darkest hells created by the Nazis. Herzstark’s mathematical and mechanical dexterity saved him from death.